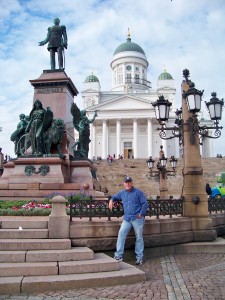 Just got back from a fascinating tour of Helsinki, Finland and some of the surrounding countryside. I’ve learned quite a bit about these Nordic countries that I didn’t know before. I’ve always heard of Finland (like during the Winter Olympics) but otherwise, haven’t paid much attention to it. Despite their long and cold winters, the people here seem to be very proud of their country and wouldn’t live anywhere else.

We also visited Sweden a couple days ago (Stockholm) and enjoyed our short stay there. We had some vodka in an ice bar (everything inside is made of ice, including the glasses you drink from) which was very cool (pun intended). Stockholm is a very picturesque city, especially the old part of town with its cobblestone streets and such.

These have been whirlwind tours so far, only a day in each city. We’ve been typical tourists on this trip, riding on tour buses and walking around town clicking away on our cameras and following guides with their number signs held up so we won’t get lost. We probably look pretty silly (like tourists back home) but I’m sure we are important to their economy so they seem to treat us nice.

Speaking of economy, everything is very expensive. The dollar is not strong compared to the euro and other foreign currency, so we’re unable to contribute much to the local economies over here. Just taking pictures and enjoying the sights. 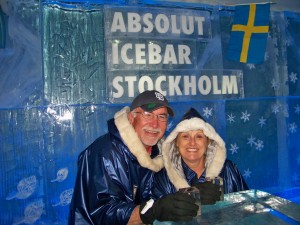 Marci and I having a cold one!

The weather has been nice so far-no rain and temperatures in the 60’s and low 70’s. From what we heard, the last cruise had awful weather (very rainy) so we’ve been lucky.

We’re continuing to enjoy this trip very much which has been a gift to us in more ways than one. There are times when I don’t feel that we belong here (most of the people who “cruise” are people with a lot of money and expensive tastes) but we’re making the most of it-pretending that we fit right in.

Tonight we travel to St. Petersburg, Russia. I’m looking forward to our visit to the Hermitage Museum where Rembrandt’s “Return of the Prodigal” is on display. I have a print hanging in my office at home so it will be amazing to see the real thing.

This entry was posted in Personal and tagged Cruise, vacation. Bookmark the permalink.