The Rice Kryspies: 40 Years Ago 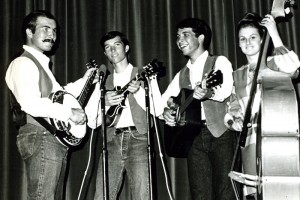 I began my youth ministry career as a club director for Ventura County (California) Youth for Christ in 1963. Folk music was getting real popular about that time (Joan Baez, the Kingston Trio, Bob Dylan, the New Christy Ministrels) so we formed our own folk groups as a way to be “relevant” with teenagers. The first group I had was a trio patterned after Peter, Paul and Mary called “The Accidents.” I played the upright bass in that group. Then, after hearing the Dillards (who were playing folk clubs around Southern California and appearing on the Andy Griffith TV show), I learned to play banjo and formed a bluegrass group with my brothers called “The Rice Kryspies.” My wife Marci played the bass.

Harry White, who was Ventura YFC’s sound engineer, recently unearthed some old tape recordings of early YFC rallies, several of which featured The Rice Kryspies. The recording below was made on May 10, 1969–exactly 40 years ago. The introduction is by Ventura YFC director Roger Cross (who later became the president of Youth for Christ/USA). The song you’ll probably recognize. Just keep in mind that the Beatles were still together in 1969. This was very cutting edge stuff back then!

8 Responses to The Rice Kryspies: 40 Years Ago