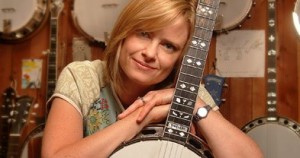 Yesterday’s San Diego Reader carried an interview with Alison which included a nice mention for my radio show:

“And I tuned in every Sunday night to Wayne Rice’s Bluegrass Special on KSON. He’s still on the air and probably has one of the longest running bluegrass radio shows in the country. So, as it turned out, San Diego was a great place to learn to play bluegrass, even though that might sound a little counterintuitive.

Alison grew up here in San Diego, then went to Harvard University where she majored in finance. She became an investment banker with Smith-Barney but later ditched her banking career for a stint with Alison Krauss and Union Station. She later formed her own group The Alison Brown Quartet, which is more jazz-oriented than bluegrass. She now owns her own successful record label with an impressive roster of artists.

Her show at Anthology was fantastic. Yesterday was Marci’s birthday and while Marci doesn’t usually allow banjos at her birthday parties, she made an exception for Alison, who wished her a happy birthday from the stage.