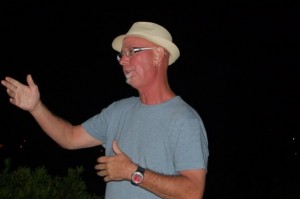 Tic, as always, blessing all of his friends on Saturday night. Photo by Mike Atkinson.

This week is Tic Long’s last at Youth Specialties, the organization I co-founded with my old friend Mike Yaconelli. Mike and I and our friend Denny Rydberg ran YS for the first seven or eight years, and then we made the smartest decision we ever made: in 1977, we hired a 25-year-old named Ronald “Tic” Long to be our “office manager.” I don’t remember checking to see if he had taken any courses in business or had any business experience on his resume, but we liked him so much, we hired him on the spot.

If you are familiar with Youth Specialties, you know that the organization has had a good run and has accomplished some pretty amazing things in its 40 year history. But it is now owned by Zondervan Publishing House and due to the economy and some corporate restructuring, quite a few employees were laid off recently, including Tic–after 32 years.

This past Saturday night Tic threw a heck of a party at his beautiful home in El Cajon for some of his old YS friends and they came from far and wide. We had a wonderful chance to celebrate with him his years at YS. Some impromptu speeches were made that sent a lot of love to Tic but also reminded me that I was very blessed to have worked with this very special man for more than 15 years. 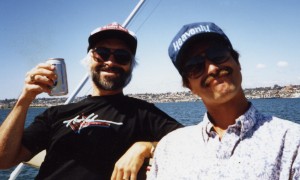 A toast to friendship, then and now.

I said it at the party and I’ll say it again. Tic was the glue that kept Youth Specialties together for so long when the owners (Mike and I) did our best to drive it into the ground. Many years ago I had lunch with Thom Schultz, the owner of Group Publishing who told me they had basically given up trying to compete with us in the events department. But he did ask how we managed to pull off such great conventions and one-day seminars year after year. I told him we had a secret weapon named Tic Long.

But Tic is a much more than a great leader who knows how to get things done. He was and is a great friend. Even though our relationship took a hit when Mike and I parted company in 1994, Tic took the initiative to bring restoration and healing to our friendship and also to me personally. Our Canadian buddy Marv Penner mentioned that he doesn’t know anyone else who so many people claim as their “best friend.” That’s so true … Tic has an amazing capacity for friendship.

If an investor had the choice to but buy stock in either Youth Specialties or Tic Long right now, I know where the smart money would go. I can’t wait to see how God uses Tic in the years to come. Trust me, Tic’s story is not over by a long shot.

3 Responses to Salute to Tic Long