A good friend of mine, Dave, sent me an email recently asking, “How’s Marci?” He also reminded me that the “Marci Page” on my website had not been updated in a long time. He was correct about that. My bad.

Marci, in case you don’t know, is my wife of 52 years now and she has had some unfortunate health issues beginning with a brain tumor that was diagnosed back in 2001. That led to major surgery (a bi-frontal craniotomy) and several months of recovery. Thankfully, she DID recover fully and the brain tumor—while it was large and dangerous but not malignant—never affected her quality of life after it was removed. We have had many wonderful years together since her surgery, for which we are very grateful to God. That is the story which you will find on Marci’s page, as well as a few updates. But they are now several years old.

So, to answer my friend’s question, let me update you on my wife’s condition now.

About seven years ago, Marci began to notice weakness in her right leg. We were at an IBMA conference in Nashville when she struggled to make the short walk between the convention center and our hotel. When we got home, we made an appointment with our family doctor and eventually saw a string of neurologists and other specialists to get a proper diagnosis. After numerous tests, scans and consultations, one of the neurosurgeons recommended back surgery. One of the MRI’s showed a slight bulging of a disk in Marci’s lower back which might be the cause of the problem. So, back surgery was done in June of 2012. She recovered and went into a vigorous physical therapy program to get the strength back in her leg. Ultimately this was not successful. The weakness in her leg persisted just as before.

Meanwhile, she was able to keep her job (she was on the admin staff at College Avenue Baptist at the time) and do most of the things that she enjoyed doing. She just struggled trying to walk more than a few feet. She began to use a walker (which helped) and for the first time, we got a handicapped placard to put in her car.

Over the next several months, Marci consulted several more doctors, neurologists and neurosurgeons in San Diego to find out what was wrong with her. Even though she saw some of the top doctors in San Diego, they were puzzled by her condition. Finally, one of them suggested that we try to get into the Mayo Clinic in Rochester, Minnesota, for a complete physical exam and diagnosis. We agreed and within a few months, Marci’s application was accepted. We booked our flights and made the trip to Minnesota in July of 2014. 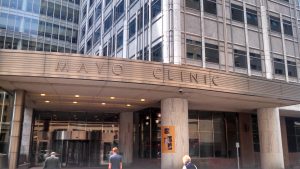 Mayo Clinic is an amazing place. It takes up most of downtown Rochester and everyone in the city is connected to it somehow. We stayed at a hotel in the center of town and were given a wheel chair to shuttle Marci from one appointment to the next—all of which were scheduled over the next several days. When we told our primary Mayo Clinic doctor that our San Diego doctors were stumped by Marci’s case, he replied “We don’t do ‘stumped’ here.” He guaranteed that they would solve the mystery and give us an accurate diagnosis.

And they did. It took more than a week of exams and tests but finally our doctor told us that Marci had “Primary Progressive MS (multiple sclerosis).” The bad news: there is no cure. The good news: it’s not a terminal disease and it moves slowly. But it will continue to weaken and cause difficulty walking and performing other physical activities. We have found this to be true. Marci is no longer able to walk, even with a walker. 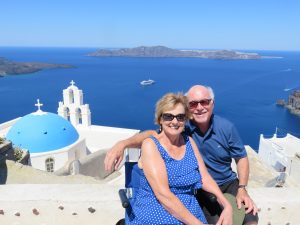 On the Greek island of Santorini, May 2016

That however didn’t stop us from celebrating our 50th anniversary in a big way (which was two years ago). We went on a Mediterranean cruise, visiting Italy, Greece, Turkey and Spain. The cruise ship was very well-suited for people with disabilities, and on our shore excursions, I pushed Marci up and down a lot of cobblestone streets in a portable wheelchair that we took with us. It was an amazing vacation.

Over the past few years, we have learned a lot more about the disease and have made major changes to our lifestyles. Both of us resigned from our staff positions at College Avenue Baptist, sold our house and moved into a smaller place without stairs or other obstacles. Our new home has been a real blessing to us. Marci can no longer drive, so I am her chauffer and servant, which I am happy to be. Two years ago we purchased a small battery-powered mobility chair that enables her to get around the house, go shopping and have a lot more independence than she would have otherwise. In my opinion, that chair is one of the greatest inventions of all time. We also bought a used Toyota Sienna which was retrofitted to accommodate people with mobility issues. God has been good in providing these things for us.

While the disease continues to weaken Marci’s legs, it hasn’t affected the best parts of her—her beauty, her radiance, nor her determination to make the best of every day. She does have some bad days when the symptoms make it hard for her to function, or she is sapped of energy, yet she remains upbeat and rarely complains. She is a remarkable woman who I love more than ever and despite her disability, she is a real encouragement to me and everyone else she knows.

Some good news: In the last year, the FDA has approved a new medication for people with Primary Progressive MS (the first of its kind) which has proven effective at slowing the progession of the disease. It is not a cure, nor does it reverse any of the symptoms, but Marci was approved to receive treatments (infusions) of this medication and she has now received two. They are very expensive and we are not sure how much we will have to pay (beyond what our insurance will pay) but we are trusting God for his provision as always.

So there’s an update for my old friend Dave and for anyone else who might be interested. I’ll try to keep posting new updates as things change.