I wish I could say that I spent the first full day of the new year doing something constructive or creative but I watched football all day. Three games. Actually I think I watched six or seven football games this week. How many bowl games are there now? I can remember when all of them (Rose, Sugar, Cotton, Orange) all happened on one day, bringing the college football season to a merciful end. But now it goes on and on … which I guess is OK with me since I love the game and enjoy watching if I have the time. 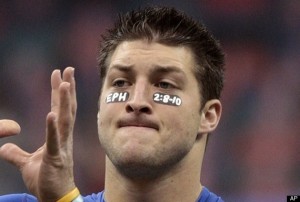 Last night in the Sugar Bowl, the University of Florida’s well-known quarterback Tim Tebow played in his last college football game as he led his Gators team to an easy victory over the Cincinnatti Bearcats.

I’ve not followed Tebow’s career closely, but by all accounts, he’s not only a tremendous quarterback but a dedicated Christ-follower who seems almost too good to be true. Nobody has a bad thing to say about him and he’s unabashedly outspoken about his faith.

It’s not surprising to me that Tebow grew up in a Christian home (his parents were missionaries) and was home schooled even while he played high school football. While not all home-school kids turn out like Tim Tebow, I’ve become increasingly persuaded that parents who home-school their kids are not as over-protective or paranoid as we thought they were. They may instead just be taking more seriously than the rest of us the Biblical imperative to train up their children in the way they should go. Sadly, too many Christian parents are content these days to outsource the upbringing of their children to the government, the popular media, even the church.

As I listened to the young quarterback (who will be headed for the NFL this year) give glory to Christ for his win last night, I couldn’t help but wonder if he will continue to do so as a pro. The TV commentators last night described how his Florida teammates protected him from people and activities that might compromise his reputation. I hope he continues to have those kind of people around him. At least I know he has those kind of parents.