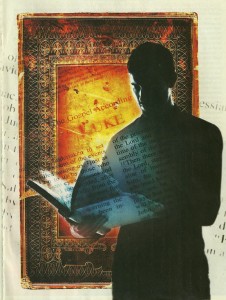 The December 2011 issue of Christianity Today featured an article by Anthony Baker, a theology professor at the Seminary of the Southwest titled “Learning to Read the Gospel Again” with the subtitle “How to address our anxiety about losing the next generation.” Losing the next generation (or expressed positively—hanging on to the next generation) is a topic I’ve been thinking a lot about lately in my role as Pastor to Generations at College Avenue Baptist Church. Like many churches, we are doing our best to stop the bleeding of young people leaving the church in record numbers.

Professor Baker makes a strong case in this article that the only thing capable of holding young people to their faith is the Gospel itself. He quotes the venerable theologian Stanley Hauerwas who made this comment about the emergent church movement which of course targets younger generations: “The future of the church is not found in things like this; the future is in doing the same thing Sunday after Sunday.” The “same thing” Hauerwas is referring to here is not the same failures of acculturation, but rather the continual proclamation of the good news, the Gospel about Jesus Christ, and “attending to the various classical practices that form people’s lives within the life, death and resurrection of Jesus Christ … The future of the church is found in doing this week in and week out, Sunday after Sunday, come rain, drought, hell or high water.”

Baker notes that one doesn’t have to look far to find churches where the “same thing” is a thing of the past and he suggests that youth & children’s ministries today are particularly prone to skipping over the gospel message in favor of more relevant fare.

For the kids, the situation is especially dire. Summer camps feature Jesus on a surfboard, or perhaps in safari gear, while Sunday morning classes tend to specialize in low-quality group counseling sessions. What we offer is anything but the simple gospel that ‘God was reconciling the world to himself in Christ’ (2 Cor. 5:19). On good days the children humor us by pretending to enjoy themselves, all the time wondering when they get to do something more fun.

Quoting a memorable line from Kenda Creasy Dean and Ron Foster, he continues: “Young people look to the church to show them something, someone, capable of turning their lives inside out and the world upside down. Most of the time, we have offered them pizza.”

What Baker is suggesting is not that we stop using age-appropriate methods of reaching and teaching our young people, but that we consistently offer our kids a fresh and inspiring look at Jesus as revealed to us in the Scriptures. He continues,

“Of course what Matthew Mark, Luke and John offer us is a story, but not just a story. It’s also the linguistic vessel through which we encounter the loving, creating and saving God. The central character in this narrative loves us back. After asking, ‘Do you love what you are reading?’ the Christian educator ought to be able to add, ‘And are you loved by what you are reading?’… Imagine a church in which children and adults of all ages, races and classes were bound together by their common love for the words of the Gospel. If Christians can learn, week after week, to read the story of Jesus of Nazareth—to love what we read, to be loved by what we read—then surely the future of the church would look a bit more hopeful.” 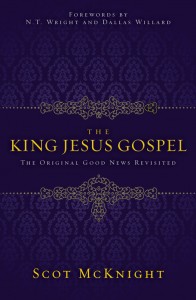 I also read a new book last month by professor Scot McKnight (North Park University) titled The King Jesus Gospel which has greatly enlarged my understanding of what the Gospel is all about. McKnight begins at the beginning of the book by asking the reader to write down on a piece of paper an answer to the question “What is the Gospel?” I played along and wrote something like this: “The Gospel is the good news that Jesus died on the cross for our sins, was buried and then rose again on the third day.” I based my explanation of the Gospel on Paul’s summary in 1 Corinthians 15:3.

As it turns out, I wasn’t too far off. McKnight in fact bases much of his book on the same verse in 1 Corinthians. But he takes issue with evangelicals who summarize the Gospel more in terms of a formula for salvation: “Christ died on the cross for your sins. If you will repent, believe and receive Christ as your personal Savior, you will be saved.” I have to admit, I have presented the Gospel that way many times.

But McKnight’s view is that such a formula is not the Gospel but “the plan of salvation.” It is, of course, an important part of the Gospel, but it’s not the Gospel. When we reduce the Gospel to the plan of salvation, writes McKnight, we tend to make the Gospel more about us and what we do than about Jesus and what he has done. The Gospel is not our story, writes McKnight, but instead it is the story of God, the story of Jesus, how he came as the Messiah of Israel, lived, died, rose again, ascended into heaven and is coming back again to rule over his Kingdom forever and ever. That’s the good news (Gospel) about which all of the four evangelists wrote and which is contained in their four accounts which are appropriately named “The Gospel (according to Matthew, Mark, Luke and John).” This is also the Gospel which Paul proclaimed in 1 Corinthians 15: 1-5: “Now brothers and sisters I want to remind you of the Gospel I preached to you, which you received and on which you have taken your stand. By this Gospel you are saved, if you hold firmly to the word I preached to you. Otherwise you have believed in vain. For what I received I passed on to you as of first importance: that Christ died for our sins according to the Scriptures, that he was buried, that he was raised on the third day according to the Scriptures, and that he appeared to Cephas, and then to the twelve.” McKnight asserts that these four crucial events in the life of Jesus Christ are the concern and the primary message of the biblical evangelists, not the “four spiritual laws” which are the concern and primary message of evangelical Chrisitanity today. The Gospel as a system of personal salvation is an incomplete Gospel, says McKnight, and is ultimately self-centered.

What McKnight is saying is that the Gospel is more than what can be communicated in four bullet points. It is even more than what happened on the Cross. It is the whole story of God’s redemptive plan, from the creation story to the coming of the Messiah to the final consummation of human history when Jesus reigns forever as King of Kings and Lord of Lords.

The story is told of author and professor Robert Webber’s (Wheaton College) encounter with a student who asked him to explain the Gospel. He replied, “Do you have an hour?” McKnight himself takes a stab at summarizing the Gospel in his book and his summary takes six pages. He’s not saying that it’s impossible to be concise and clear about the Gospel message by using just a few words (that’s exactly what Paul did it in 1 Corinthians 15). He’s just saying that the Gospel is the entire amazing story of Jesus as Messiah, Savior, Lord and King as told in the context of God’s amazing plan to redeem all of humankind.

I remember reading a book years ago by Paul Little called Your God Is Too Small. McKnight’s book has made me think that mayber our Gospel has become too small. I agree with Baker that the Gospel, the good news about Jesus, is big enough, awesome enough and certainly powerful enough to capture the hearts of our young people and keep them connected to Christ and the church. If the Gospel is something that we want our children and young people to believe and trust for a lifetime, then we must take the time, week after week, to teach it to them.