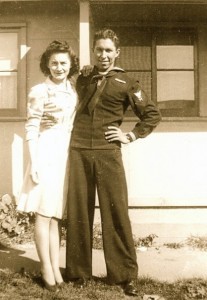 My sister Mary posted this old picture of our parents on her facebook page last week. My dad was in the Seabees during World War II, building airstrips, barracks, bridges and the like in the Pacific Theatre. This photo was probably taken when he was on leave, early 1945, when I was conceived. I was born in November of that year, just a month or two after the war ended. I was an original baby boomer.

My parents grew up in a different time. Growing up I heard them say things like: “When I was your age: we didn’t have indoor toilets … we had to pump water from a well … we had to milk cows and gather eggs before breakfast … we had to walk five miles to school.” It all sounded like ancient history to me.

Now my history is ancient, too.

How many of these can you relate to? They were all true when I was growing up:

Ancient history, indeed. One of these days your life will become ancient history too. Enjoy it now … while you can!