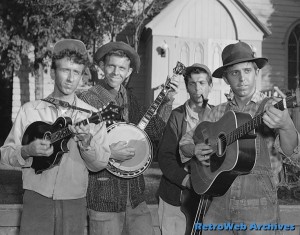 The Dillards as the Darlin's. Mitch is 3rd from the left.

One of my bluegrass music heroes died this week and along with the sadness that I have felt, I also have felt deep gratitude. Mitch Jayne was the senior member of the Dillards, a bluegrass band from Salem, Missouri that came to California in the early sixties, landed a job on the Andy Griffith TV show and played “The Darlin’ Family” on several episodes which probably are rerun somewhere in the world every day. They also recorded two LP’s for Elektra Records, “Backporch Bluegrass” and “Live, Almost” which in my opinion are two of the most important bluegrass records ever made.

Mitch played stand-up bass with the Dillards and was the band’s emcee. He was a wonderful storyteller and stand up comedian who had a wry self-deprecating sense of humor that always had audiences in stitches. “We’re the Dillards and we’re hillbillies. I thought I’d better tell you that in case you thought we were the Budapest String Quartet.” he would say in his Ozarky accent while puffing on his pipe. I saw the Dillards in person more than once back in the sixties at folk clubs like the Ice House in Pasadena and I always laughed until I cried. I loved the music they made, but even more I think, I loved how the Dillards entertained. They had the whole package: great musicianship, great songs and a great stage show featuring Mitch’s stories and humor. I always credit the Dillards with being the band that hooked me on bluegrass music, but it’s not because they were the first bluegrass band I ever heard. My dad had several Flatt and Scruggs records around the house when I was a kid. I got hooked on the Dillards’ brand of bluegrass because it was just so much fun.

When my brothers and I formed our band “The Rice Kryspies” (and later, Brush Arbor) we pretended to be the Dillards and I tried to play the role of Mitch. I wanted to be Mitch in the worst way. I did my best to tell funny stories like Mitch and I even tried to pretend I was from the Ozarks too and talk with a southern accent. I didn’t even know where the Ozarks were. When I listen to early recordings of the Rice Kryspies now, it’s kind of embarrassing to hear how much of Mitch’s material I stole outright.

All that to say that I mourned Mitch’s death at age 80 this week. He had a big influence on me and I will always be grateful. Rest in peace Mitch.

This entry was posted in Bluegrass and tagged Bluegrass, Mitch Jayne, The Dillards, The Rice Kryspies. Bookmark the permalink.

2 Responses to Tribute to Mitch Jayne