The article below was excerpted from my book Cleared for Takeoff by HomeWord for the March edition of their parent newsletter:

Respect is obviously short in supply these days, but is absolutely something our kids need to learn for their own benefit. When kids learn to respect others, they also learn to respect themselves. You must give respect before 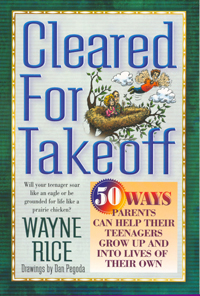 you can get any, even from yourself. And self-respect plays a huge role in how young people mature. As parents, we can play a key role in helping our kids learn about respect and incorporate it into their lives by using consequences consistently when we discipline.

Of course, respect is a two-way street. Especially with teenagers, parents need to show respect as well as expect it. Kids who are treated respectfully are more likely to be respectful. Mutual respect doesn’t mean that parents and children have equal amounts of authority in the home. Instead, kids respect their parents by obeying them. And parents respect their kids by expecting them to obey. This kind of mutual respect results in greater trust and more freedom for both parents and kids.

So how do you teach kids to be respectful? Certainly not by demanding, begging, or pleading. Respect has to be earned. Parents earn respect by establishing their authority and being competent and consistent year in and year out. This, of course, is where hanging in there with well-defined expectations and consequences comes in.

Whenever you set limits or make agreements with your teenager regarding behavior or expectations, you also need to discuss with him or her what happens in the event there is a failure to comply. If this is done well before the fact, rather than after, it can be done without emotion, without struggle, without disagreement. If the consequence is reasonable, your teenager will likely understand the need for it and agree to it without argument. If he or she can’t agree to a consequence, then you have reason to believe that your teenager has no intention of compliance anyway.

Once consequences are in place, they should be allowed to take effect without parental intervention. Once they are established, there is no need for further disciplinary action. The consequence should itself provide the discipline.

The object of consequences is to teach responsibility. Once consequences become punishment, retribution, or vengeance, they lose their effectiveness. To prevent their misuse, authors H. Stephen Glenn and Jane Nelson (in their book Raising Self-Reliant Children in a Self-indulgent World) suggest remembering the three Rs of consequences.[1]

1. They should be related to the behavior in question. In other words, the first place to look for a suitable consequence for a behavior is the behavior itself. Rather than grounding kids for every bad thing they do or using some other one-size-fits-all consequence, try connecting the behavior with the consequence in some logical way. If your teenager can’t return the car with a full tank of gas, he or she loses driving privileges or has to wash the care the next day or get up early the next morning and get the gas tank filled at his or her own expense. It’s impossible to make every consequence logical, but that’s usually the best way to make them effective.

2. They should be reasonable. If a consequence is too severe or too harsh, teenagers are likely to become angry and resentful and rebel against it. While no consequence ever seems fair to a teenager, they will be more likely to accept them and learn from them if they make sense. Sometimes parents make the mistake of imposing consequences that are not only unreasonable but also unenforceable. “Either change your behavior or find another place to live!” They know you aren’t serious when you say something like that. On the other hand, consequences shouldn’t be so inconsequential that they don’t act as motivator or deterrent at all. If a teen’s consequence for coming home from a party with alcohol on his or her breath is a $20 fine, the teenager is likely to think that’s not a bad deal. Minor behaviors should result in minor consequences, serious behaviors in serious consequences. This will help teenagers understand values and choices in their proper perspective.

3. They should be respectful. What this means is that we implement and enforce consequences out of a desire to help our kids become capable and responsible, not out of a desire to see our kids suffer, to get revenge, or to win. Again, our objective is not to punish, but to provide adequate and effective discipline.

Teenagers care deeply about fairness and respect. Even though they cry “unfair” at ever opportunity, they do have the ability to understand why you must set limits and enforce consequences. Most kids will reluctantly admit that they respect and admire teachers at school who are clear and consistent with their requirements and rules, even though they have a hard time living up to them.

It will probably take some time for you to learn to use consequences effectively. It’s much more than a science. You’ll probably make some mistakes and have to feel your way along as you decide when to use consequences, how often you will use them, and what exactly they will be. Some kids require that you use them a lot; others won’t. Some require very severe consequences; others don’t. You’ll have to be creative and use your best judgment. Your kids need to learn that the real world operates by laws of cause and effect that can’t be suspended just because they are inconvenient. The consistent application of consequences will help teens learn this principle, which will in turn result in their growing in the areas of respect; for those in authority, for others in general, and for themselves.