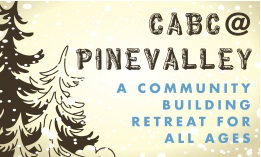 This past weekend, our church held its third annual all-church retreat at a conference center in the mountains near San Diego. CABC@PineValley, as the retreat is known, is designed to bring all ages of the church together for a weekend immersion experience in community-building. About half of our church attended this year and by all accounts, everybody had a blast.

Along with several large group meetings, there were numerous optional activities that people could sign up for. On Saturday afternoon, I led one of them called “Cross-Generational Connect,” an opportunity for young people and older people to intentionally connect with each other. About 20 people showed up between the ages of 17 and 75—a good turnout considering that there were plenty of other fun things to do at the same time.

Essentially, what we did was a modified version of speed dating. I began by asking everyone to line up by age—from youngest to oldest. I gave the older folks permission to lie about their age if they considered themselves younger than they actually were. After they were lined up, I divided the group in half so that we had two groups: the youngsters and the oldsters. We then formed two concentric circles in chairs facing each other, with the youngsters on the inside circle and the oldsters on the outside circle.

I gave each person a list of suggested questions and told them they had five minutes to introduce themselves to the person they were seated across from and find out some things about them that they didn’t know. After five to seven minutes, the conversations would stop and the inner circle (the youngsters) would rotate one seat to the right. This was repeated for about an hour, which allowed everyone a chance to talk to each other.

I later heard from several who said this was their favorite part of the whole weekend. They came hoping to meet someone new and this little activity made it happen. As a participant myself, I joined in and talked with several young people (yes, I was an oldster). In one of my conversations, I asked a student, “What do old people like me need to know most about young people like you?” Her answer: “I wish older people knew that we really do want you to be around us, to mentor us and teach us what they know about God and about life in general. You have so much experience that we don’t have.”

I don’t know why her answer surprised me, but it did. It reminded me of a quote from the late H. Stephen Glenn that I often cited back when I was teaching “Understanding Your Teenager” seminars:

“Left to their own devices, teenagers will always gravitate to the oldest person they can find who will take them seriously and treat them with dignity and respect.”

This was true generations ago and it’s even more true today.