Last week I went to Chicago to attend a 3-day youth ministry conference called “Shift the Future” at Willow Creek Community Church. It was sponsored by the Willow Creek Association, a leadership organization affiliated with the host church.

I went because I’m doing some writing this year on youth ministry and wanted to listen to what others were saying about it. I went to all the sessions as a conferee, something I really haven’t done in a long time. For most of my life I’ve been involved in putting on conferences or speaking at them. To just sit, listen and take notes at a ministry conference of any kind felt very different for me. While there, I always felt like I needed to be doing something … but these were false alarms going off in my head, I kept telling myself. 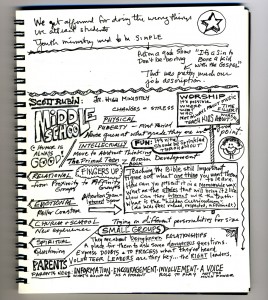 So I took notes. I’m not a very good note taker. I tend to doodle a lot. At the right is a sample, from a seminar I attended on junior high ministry led by Scott Rubin. The seminar was actually quite good although you couldn’t tell from my note-taking.

Highlights of the conference included the opening address by Francis Chan, a pastor from Simi Valley California who has become a very popular conference speaker (he also did the YS conventions this past year). He’s dynamic, passionate, transparent and very inspiring. I did have a question regarding his use of his daughter in one of his illustrations to make a point. I’ve always been hesitant to do that–to use your own kids in stories that make you (or them) look good. There are two schools of thought on that (yes and no). I’ve generally come down on the “no” side of that debate even though I sometimes break the rule myself.

I also enjoyed the session featuring Mark Holmen, a pastor from Ventura California and Bubba Thurman, a youth pastor from Texas. Together they presented a compelling argument for ministry to and with families, which of course is a passion of mine. I’ve heard Holmen several times (I’m a big fan of his) but never before Bubba Thurman. I was very impressed by his presentation.

I also enjoyed hearing Kara Powell speak. Currently with the Fuller Youth Institute (Fuller Seminary), I was blessed to have her as a student (one of the brightest and best I ever had) when I taught youth ministry at Bethel Seminary in San Diego. It’s not surprising at all to me that she’s making such a significant contribution to the field of youth ministry now.

While I was at the conference, I had a chance to have dinner with an old friend of mine, Mark Senter, professor at Trinity Evangelical Divinity School. He has just finished writing a very thorough history of youth ministry called When God Shows Up, scheduled to be released next January by Baker Academic Books. We had a very interesting conversation about the future of youth ministry and a few other topics as well. One thing we both agreed upon: the future of youth ministry is no longer in our hands. Our role is to cheer on the next generation of youth workers and avoid putting a lid on their creativity and passion for doing what God is leading them to do.

A big THANK YOU to the Willow Creek Association for making it possible for me to attend the conference, especially to Scott Rubin, the junior high pastor at Willow Creek Church, who also let me stay at his house. It was an encouraging and productive week for me.