I’ve been playing the banjo now for … let’s see, that would be 46 years … the same number of years I’ve been married. Yep, I bought my first banjo on my honeymoon. It was a Harmony banjo, made of plastic, which I bought at a pawn shop in L.A. We were on our way to Palm Springs (from Ventura County, where we were living at the time) and as I recall, Marci was OK with me buying the banjo with some of the money we were given at our wedding. We both were singing in a folk trio at the time called the Accidents (patterned somewhat after Peter, Paul and Mary) and we figured a banjo would be a nice addition if I could learn to play it. 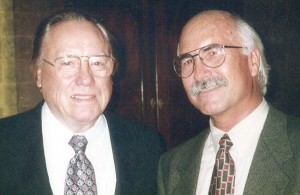 And I did for the most part. Like most banjo players, I learned to play by listening to Earl Scruggs. There were other banjo players (Doug Dillard was one of my favorites) but as I soon found out, they all learned from Earl.

Earl passed away last week at the age of 88 and he was still making music well into his ninth decade of life. He won a Grammy award for best country instrumental performance at age 78.

HIs memorial service was held last Sunday afternoon at the Ryman Auditorium in Nashville, home of the Grand Ole Opry for so many years. I listened to a broadcast of it on the web and it was very moving. It’s amazing how many people were there to pay tribute.

If you would like to listen to my radio show honoring Earl Scuggs, you can listen online at www.kson.com/bluegrass.

Slacker Radio also asked me to program an Earl Scruggs tribute station and it is now available for listening at http://www.slacker.com/station/earl-scruggs-tribute.

This entry was posted in Bluegrass, Personal and tagged banjo, Bluegrass, Earl Scruggs. Bookmark the permalink.