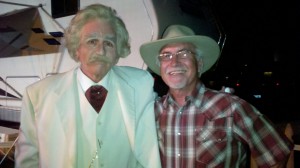 Just returned from another Huck Finn’s Jubilee in Victorville which is how I have spent Father’s Day weekend for the past 20 years or so. I have been involved with this event either as a performer with my band Lighthouse or as the main stage emcee or both. I also serve as a consultant to the show’s producer (helping with talent selection) each year and I host the Sunday morning chapel service which is where my two worlds (ministry and bluegrass) collide in a big way.

The festival went great this year with a large turnout and great weather. The idea of going to Victorville in June sometimes scares people away because they think it’s going to be too hot. But we have had moderate temperatures and cool nights for several years in a row now. The music was wonderful with outstanding performances by the likes of Sierra Hull, Doyle Lawson and Quicksilver, Rodney Dillard (of the Dillards), NewFound Road and Roy Clark. It was also great to spend the weekend with my wife, daughter Amber, and our three grandkids Nick, Maddie and Jack. They all had a good time.

I’m always amazed and a bit conflicted that I get to live in two completely different worlds. Throughout most of the year, I’m a pastor, serving on a church staff, doing rather mundane (yet significant I hope) ministry tasks. But on a weekend like the one I just had, I’m not a pastor but a bluegrass music insider, radio personality, stage announcer, friend and colleague to some of the most talented musicians on the planet. I’m amazed by it all and grateful to God that I get to do this.

But I got a quick return to reality when I got home Sunday night. The water supply to our home had been shut off by our neighbor because of a pipe break at the water meter on the street. I spent all day Monday getting it fixed and somehow strained a muscle in my back in the process. But the repair was made, the water is back on and except for the sore back, life is pretty much back to normal. See you next year, Mr. Twain.